A author I followed on Twitter until this past weekend and I had an exchange. This came after he posted a well-written must-change-something-about-how-we-handle-guns piece. (There’s a lot of that those going around.)

ME: Totally agree but must ask a tough question: How will this change scenes of gun violence you write going forward?

FELLOW WRITER: Unlikely to change them. My gun violence always has consequences — negative ones.

Now I respect this writer. He’s prolific, has voice and attitude, and cares a lot about the craft of writing and helping other writers figure out what makes that craft work. But I realized that he, as an author of ultra-violent stories, is not engaged with the consequences of his work OFF the page. And really that is the entire point of what we do as writers. It’s not enough to punish characters within our work for acts of violence if the violence itself is elevated, glamourized or becomes so yawningly familiar and common as a result.

Writers are bound the edict that conflict drives the narrative. There is no story without an obstacle, an opponent, or a powerful force challenging, thwarting, denying and, yes, even trying to kill our heroes and heroines. But this edict simply demands confrontation with loss and sacrifice. It demands bravery in the face of fear and resourcefulness. This edict doesn’t demand blood. It doesn’t demand guts.

When I think of of the biggest story-to-film franchises of the last half century, I think of Harry Potter and Star Wars. Neither series shirks from violence and conflict but both series manage to do it without showing you entrails and brain matter. (The only other sizable series is James Bond which obviously is more violent).

An old schoolmate with whom I shared an animation class at NYU, Mo Willems, draws for children and upon understanding that “the people I write for, my audience, are being slaughtered with remarkably little effort because of the easy access that people have to very powerful weapons” he floated a little proposal . One of his suggestions:

Any entertainment (TV, Movies, Video Games, Books, etc.) that feature gun-play will be subject to a tax of 20% of the producers’ profits. Producers can still make blood-soaked entertainment, understanding that their profits will be reduced.

Mo writes with whimsy and he knows it will never happen. But it’s far past time for the creative community to stop pretending that it’s not part of the problem, that it has no cultural effect, that it’s enough to kill the bad guy at the end of our stories after leaking blood and dropping body parts all through our narratives. This simple fact is “gun violence always has consequences — negative ones” both on and off the page. 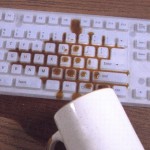 Was planning a good writing day today. Ready to go and at the desk at 9am. Booted up computer and immediately spilled coffee, perfectly nailing my keyboard in the most complete way. Goodbye, workday. Hello, futile keyboard disassembly and cleaning followed by trip to the Apple store (which has become over the years some kind of formless commerce hive that now sort of gives me the creeps).

I know plenty of others have gone before me in this yet I’m still trying to figure what my brain did to so perfectly launch my coffee cup. And why.

Gotta see this dark study of magnetism in a fluid medium.