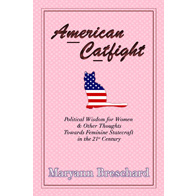 A couple of years ago I wrote out a little book about the status of women and power in the United States called American Catfight. It was modest in size but large in ambition. (Hence the subtitle “Political Wisdom for Women and Other Thoughts Towards Feminine Statecraft in the 21st Century.”)

I wanted to wake up the lead feminists in this country to get their act together and stop fighting old fights, stop infighting altogether, and start focusing on moving women towards firmer gains on the institutions of power. After all, by the time I finished the film I made before I wrote the book, I was thoroughly convinced of the absurdity of women’s acquiescence to be left like a lint ball under the fridge of government when it came to controlling the agenda of this country at the same time that women are the voting majority of the United States.   One of the main points of my book is that there is a lot of money in politics, not just the lobbyist/donor/PAC-to-elected-officials kind either.   There’s money in Planned Parenthood.  There’s money in Susan G. Komen for the Cure.   There’s money in the National Organization for Women.  There’s money in Women’s Studies programs, too.    The problem with all this money is that women hook their entire careers to it; they make professions of the problem.    As Clay Shirky of NYU wrote in a brilliant essay called the ‘Collapse of Complex Business Models’ which came out one month after I published my book, “Institutions will try to preserve the problem to which they are the solution.”

I won’t go into restating the whole argument as that is what actually reading American Catfight is for but will note that one need only look at the new war on women’s rights to see that we’ve got a collapse of feminism’s complex system on our hands. Feminist systems have become so complex and bureaucratic in leadership that whatever systems we’ve put in place – NOW, Women’s Studies, Emily’s List, whatever – have failed to the point that the American public is debating access to birth control. Again. Forty-seven years after Griswold v. Connecticut.

That being said I have heard from a handful of very passionate women who have written me to say, “I find the word ‘catfight’ offensive.   I’m not going to read your book.  I’m a feminist!”    Quite often I want to write back, “I’m a feminist too!   And you’d know it if you actually read my damn book!”   Instead I usually write back something like this which is what I did today when I heard from a working poetess from a very large university in Boston:

I know the word “catfight” can be incendiary.   But I use it purposefully as a word to describe the feminist equivalent of women on women fighting akin to what goes on when people fight about what is “not black enough” in the African American community.    Both are groups that should be united in what they share but instead at times fall into envy and righteousness and fracture themselves over differences that no one outside their groups even sees.

But I get where you are coming from.  I have thought many times, “Why do they have to call it “Slutwalk?!””   As a writer, you understand better than most that we bend and stretch language to try to find new meanings in it or expand the ones we have.    Sometimes the new meaning takes off and sometimes it dies in the nest but we try.

So that’s what I mean by ‘catfight.’ Now I’ve got to get back to writing my new (feminist) science fantasy book because while I am a feminist, I must take my own advice and not tie my entire livelihood to it.