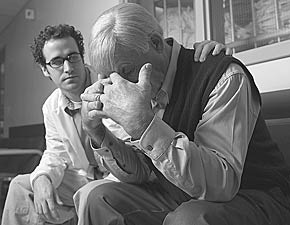 Still in pre-production and research. I’m very much enjoying, if that’s the right word, Widower, by Scott Campbell and Phyllis R. Silverman.  It’s a great book for research for a film in that documents in interviews (just like a doc!) the experience of over twenty widowers in different phases of the grief.  Some of the book’s subjects are speaking only months after their loss, others more than a decade afterwards.   In the ten months that I’ve been working with my own bereavement group, I’ve had no clue what goes on with straight men when they lose a loved one. Widowers don’t come to group to sit around and talk with us ladies!  My big takeaways so far:

The sex-drive-in-grief thing was one of my complaints about Silver Linings Playbook.   It was so right-on with so much of the depiction of bi-polarity that the fact that the Tiffany character became wildly promiscuous in her grief and slept with everyone in her office was a giveaway to me that the film was scripted by a man (even if it was simply a plot device needed to give her a “problem”.)  I don’t know ANY women – and I now personally knows tens of women who have lost a spouse – who have turned to sex for comfort or acted out sexually in their grief.    I’m not saying a widow who uses sex for comfort and/or distraction is like a unicorn but its very uncommon to turn to sex indiscriminately if you weren’t already a person who comforted yourself that way beforehand.

Anyway, still have about a third of Widower left.   And a continually growing pile of other research.